This section contains miscellaneous recipes for solving problems in docassemble.

Require a checkbox to be checked

Use a variable to track when an interview has been completed

You could also use Redis to store the status of an interview.

Exit interview with a hyperlink rather than a redirect

Suppose you have a final screen in your interview that looks like this:

When the user clicks the “Exit” button, an Ajax request is sent to the docassemble server, the interview logic is run again, and then when the browser processes the response, the browser is redirected by JavaScript to the url (https://example.com).

If you would rather that the button act as a hyperlink, where clicking the button sends the user directly to the URL, you can make the button this way: 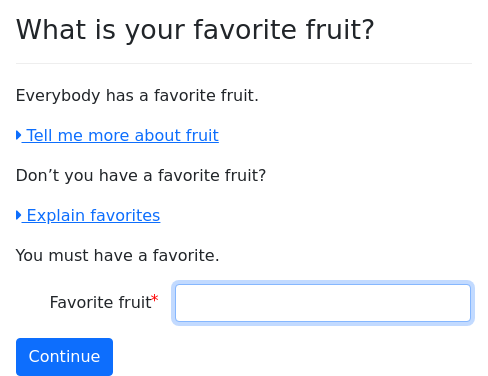 Add progressivedisclosure.css to the “static” data folder of your package.

Add progressivedisclosure.py as a Python module file in your package.

This uses the collapse feature of Bootstrap.

The object datatype combined with the disable others can be used to present a single question that asks the user either to select an object from a list or to enter information about a new object.

Another way to do this is to use show if to show or hide fields.

This recipe gives an example of how to do this in an interview that asks about individuals.

This recipe keeps a master list of individuals in an object called people. Since this list changes throughout the interview, it is re-calculated whenever a question is asked that uses people.

E-mailing the user a link for resuming the interview later

If you want users to be able to resume their interviews later, but you don’t want to use the username and password system, you can e-mail your users a URL created with interview_url().

Using a desktop computer is generally very good for answering questions, but it is difficult to write a signature using a mouse.

Here is an example of an interview that allows the user to use a desktop computer for answering questions, but use a mobile device with a touchscreen for writing the signature.

This interview includes a YAML file called signature-diversion.yml, the contents of which are:

Multi-user interview for getting a client’s signature

where the client’s signature should go. The attorney then receives a hyperlink that the attorney can send to the client. 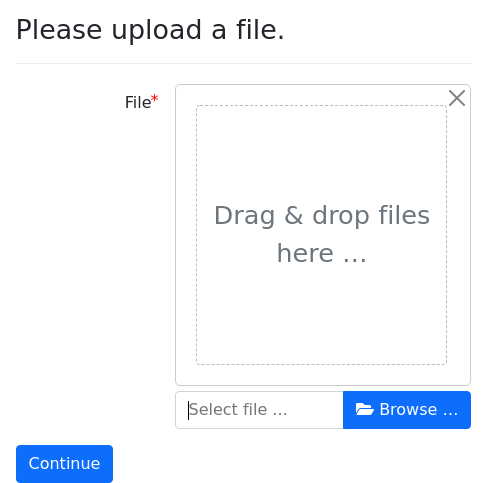 Here is an example interview that assembles a document for every row in a Google Sheet.

Documents based on objects

This example is similar to the mail merge example in that it uses a single template to create multiple documents. In this case, however, the same template is used to generate a document for two different objects.

This makes use of the generic object modifier. The template file generic-document.docx refers to the person using the variable x.

If you use Jinja2 to insert Jinja2 template tags into a document assembled through docx template file, you will find that the tags in the included text will not be evaluated. However, you can conduct your document assembly in two stages, so that first you assemble a template and then you use the DOCX output as the input for another assembly.

This example demonstrates using the docx package to modify the core document properties of a generated DOCX file.

Log out a user who has been idle for too long

Create a static file called idle.js with the following contents.

In your interview, include idle.js in a features block.

This logs the user out after 60 minutes of inactivity in the browser. To use a different number of minutes, edit the line if (idleTime > 60){.

Seeing the progress of a running background task

Since background tasks run in a separate Celery process, there is no simple way to get information from them while they are running.

However, Redis lists provide a helpful mechanism for keeping track of log messages.

Here is an example that uses a DARedis object to store log messages about a long-running background task. It uses check in to poll the server for new log messages.

Sending information from Python to JavaScript

If you use JavaScript in your interviews, and you want your JavaScript to have knowledge about the interview answers, you can use get_interview_variables(), but it is slow because it uses Ajax. If you only want a few pieces of information to be available to your JavaScript code, there are a few methods you can use.

One method is to use the script modifier.

Another method is to use the "javascript" form of the log() function.

In this example, the log() function is called from a code block that has initial set to True. Thus, you can rely on the myColor variable being defined on every screen of the interview after favorite_color gets defined.

Another method is to pass the values of Python variables to the browser using the DOM, and then use JavaScript to retrieve the values.

All of these methods are read-only. If you want to be able to change variables using JavaScript, and also have the values saved to the interview answers, you can insert <input type="hidden"> elements onto a page that has a “Continue” button.

This example uses the encode_name() function to convert the variable name to the appropriate field name. For more information on manipulating the docassemble front end, see the section on custom front ends. The example above works for easily for text fields, but other data types will require more work.

Here is an example of using JavaScript to run an action using Ajax.

The features used in this example include:

Here is an interview that uses pdf_concatenate() to bring assembled documents and user-provided documents in a single PDF file. 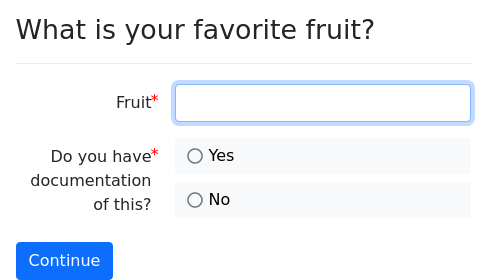 The Exhibit labeling sheets are generated by the template exhibit_insert.docx.

From the dashboard, obtain your test API keys. There are two keys: a “publishable key” and a “secret key.” Put these into your Configuration as follows:

Confirm that you have the stripe package installed by checking the list of packages under “Package Management”. If stripe is not listed, follow the directions for installing a package. stripe is available on PyPI.

Create a Python module called dastripe.py with the following contents:

Test the interview with a testing card number and adapt it to your particular use case.

The attributes of the DAStripe object (known as payment in this example) that can be set are:

The attribute .paid returns True if the payment has been made or False if it has not. It also triggers the payment process. If payment.amount is not known, it will be sought.

The user is asked for their credit card information on a “special screen” tagged with event: request.demand. The variable request.demand is sought behind the scenes when the interview logic evaluates request.paid.

The “Pay” button is labeled “Pay” by default, but this can be customized with the request.button_label attribute. This value is passed through word(), so you can use the words translation system to translate it.

If the payment is successful, the JavaScript on the page performs the request.success “action” in the interview. Your interview needs to provide a code block that handles this action. The action needs to call payment.process(). This will save the data returned by Stripe and will also call the Stripe API to verify that payment was actually made. The code block for the “action” will run to the end, so the next thing it will do is evaluate the normal interview logic. When request.paid is encountered, it will evaluate to True.

The Stripe API is only called once to verify that the payment was actually made. Subsequent evaluations of request.paid will return True immediately without calling the API again.

Thus, the interview logic for the process of requiring a payment is just two lines of code:

Payment processing is a very complicated subject, so this recipe should only be considered a starting point. The advantage of this design is that it keeps a lot of the complexity of payment processing out of the interview YAML and hides it in the module.

If you want to have the billing address on the same screen where the credit card number is entered, you could use custom HTML forms, or a fields block in which the Continue button is hidden.

When you are satisfied that your payment process work correctly, you can set your stripe public key and stripe secret key to your “live” Stripe API keys on your production server.

Integration with form.io, AWS Lambda, and the docassemble API

This recipe shows how you can set up form.io to send a webhook request to an AWS Lambda function, which in turn calls the docassemble API to start an interview session, inject data into the interview answers of the session, and then send a notification to someone to let them know that a session has been started.

On your server, create the following interview, calling it fromformio.yml.

Create an AWS Lambda function and trigger it with an HTTP REST API that is authenticated with an API key.

Add a layer that provides the requests module. Then write a function like the following.

Set the environment variables so that your provide the function with an API key for the docassemble API (which you can set up in your Profile), the URL of your server, and the name of the interview you want to run (in this case, fromformio.yml is a Playground interview).

Go to form.io and create a form that looks like this:

Attach a “webhook” action that sends a POST request to your AWS Lambda endpoint. Add the API key for the HTTP REST API trigger as the x-api-key header.

Under Forms, click the “Use” button next to the form that you created and try submitting the form. The e-mail recipient designated in your YAML code should receive an e-mail containing the text:

A session has started. Go to it now.

Converting the result of object questions 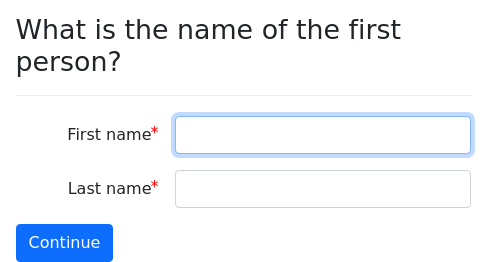 The result is that the fruit_preferences objects are copies of the original fruit_data object and have separate instanceNames.

If you want to restart an interview session and use the answers from the just-finished session as default values for the new session, you can accomplish this using the depends on feature.

When the variable counter is incremented by the new_version action, all of the variables set by question blocks that use depends on: counter will be undefined, but the old values will be remembered and offered as defaults when the question blocks are encountered again.

Here is an example of using the catchall questions feature to provide an interview that can ask questions to define arbitrary variables that are referenced in a document. 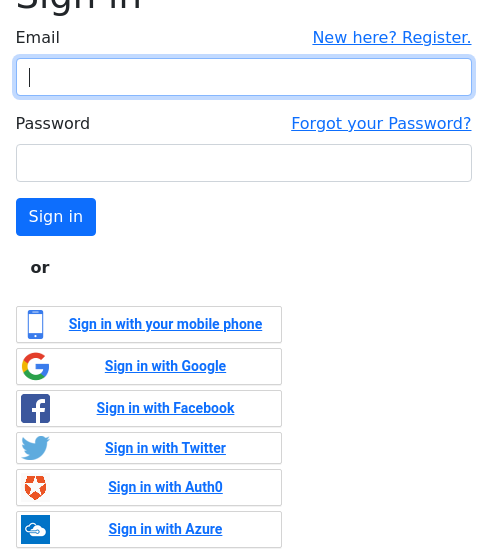