docassemble interviews can be packaged into Python packages that bundle together:

Using the Playground to make packages

One of the features of the docassemble web application is the Playground, a browser-based development platform for developing and testing interviews. This is a “sandbox” in which you can make changes to an interview and immediately test the effect of those changes. You can use the Playground to create a variety of resources (interview files, template files, static files, data files) and then build packages out particular resources.

Every interview that you run on docassemble is part of a package. When you are running an interview in the Playground, the package is called docassemble.playground1 or something similar; the 1 at the end is the user ID of the person who is using the Playground.

Packages like docassemble.playground1 should be considered temporary and should only be used for development and testing. When you want your users to actually use your interview, you should move your interview out of the Playground and into a package with an appropriate name.

Suppose you have an interview file called custody.yml, which you are developing in the Playground. When you right click the “ Share” button, and copy the link URL, or you look at your browser location bar when you are testing the interview, you will see that the URL for the interview contains?i=docassemble.playground1:custody.yml. This means that the interview (i) is in the docassemble.playground1 package and is called custody.yml. This link always runs the version of your interview that is current in the Playground. So if you make a change that accidentally introduces a bug, anyone who uses the interview will see an error message.

When you have actual users, you want to be able to make “upgrades” to your interviews without causing users to see error messages. You need to have a distinction between your “development” version and your “production” version. Here is a workflow for accomplishing this:

For more information, see how you run a docassemble interview, the Playground, the packaging your interview section of the hello world example, and the development workflows section.

From the “Packages” folder, you can also press “ Download” to obtain a ZIP file of the Python package. If you open this file, you can see what the structure of a docassemble extension package looks like.

Anatomy of a docassemble package

Here is the file structure of a (fictional) docassemble package called docassemble.baseball.

The package is known as docassemble.baseball within Python code, but the name docassemble-baseball, replacing the dot with a hyphen, is used in other contexts, such as when referring to a package published on the PyPI site, or a folder on your system that contains the source code of the package.

When installed on the server, the interview hitters.yml can be run by going to a link like https://example.com/interview?i=docassemble.baseball:data/questions/hitters.yml.

In your own interviews, you can include resources from this package by writing things like the following:

The first block uses include to incorporate by reference a YAML interview file located in the data/questions directory of the package.

The second block uses a file reference to refer to an image file in the data/static directory of the package.

The third block uses content file within an attachment to refer to a Markdown file in the data/templates directory of the package.

The fourth block uses modules to import Python names from the baseballstats.py file.

Since a Python package is just a collection of files in a particular structure, you can maintain your docassemble extension packages “offline” (outside of the Playground) if you want. This allows you to expand the directory structure beyond what the Playground supports.

If your package uses code from other Python packages that are not distributed with the standard docassemble installation, you will need to indicate that these packages are “dependencies” of your package.

This will ensure that if you share your package with someone else and they install it on their system, the packages that your package needs will be automatically installed. Otherwise, that person will get errors when they try to use your package.

If you maintain your package in the Packages area of the Playground, you can indicate the dependencies of your package by selecting them from a multi-select list. (If you the Python package you need is not listed, you need to install it on your system using “Package Management” on the menu.)

If you maintain your package off-line, you will need to edit the setup.py file and change the line near the end that begins with install_requires. This refers to a list of Python packages. For example:

Note that if your package depends on a package that exists on GitHub but not on PyPI, you will also need to add an extra line so that the system knows where to find the package. For example, if docassemble.helloworld did not exist on PyPI, you would need to include:

If you use the Packages area of the Playground to maintain your package, this is all handled for you.

From the menu, go to “Package Management.”

docassemble installs packages using the pip package manager. This installation process may take a long time. A log of the output of pip will be shown when the installation is complete. The server will restart so that any old versions of the package that are still in memory will be refreshed.

One way to install Python packages on a server is through GitHub.

If your token is e8cc02bec7061de98ba4851263638d7483f63d41, your GitHub username is johnsmith, and your package is called docassemble-missouri-familylaw, then the GitHub URL for your private repository will be:

You can enter this into the “GitHub URL” field.

Installing through a .zip file

You can also install Python packages from PyPI. PyPI is the central repository for Python software. Anyone can register on PyPI and upload software to it. For example, if you want to install the docassemble-baseball package:

A user with admin privileges can install or uninstall any package.

The purpose of the permission system is to facilitate the use of a single server by a team of developers by implementing some minor safeguards that prevent developers from interfering with each others’ work. It is not the case that each developer works in an insulated “sandbox.” All interviews on the system run with the same system UID (www-data).

Once a docassemble extension package is installed, you can start using its interviews. For example, if you installed docassemble.baseball, and there was an interview file in that package called questions.yml, you would point your browser to http://localhost/interview?i=docassemble.baseball:data/questions/questions.yml (substituting the actual domain and base URL of your docassemble site). Note that a URL like this is different from the URL you see when you are running an interview in the Playground (see above).

The best place to publish a docassemble extension packages is on PyPI, the central repository for Python software.

In order to publish to PyPI, you will first need to create an account on PyPI. You will need to choose a username and password and verify your e-mail address.

Then, go to “Configuration” on the menu and enable the PyPI publishing feature in docassemble configuration like so:

After you save the configuration, go to “Profile” on the menu and fill in “PyPI Username” and “PyPI Password” with the username and password you obtained from PyPI.

Next, go to the “Packages” folder of the docassemble Playground and open the package you want to publish (e.g., docassemble-baseball).

button to publish the package to PyPI.

When the publishing is done, you will see an informational message with the output of the uploading commands. Check this message to see if there are any errors.

If the publishing was successful, then at the bottom of the page describing your package, you should see a message that the package now exists on PyPI. 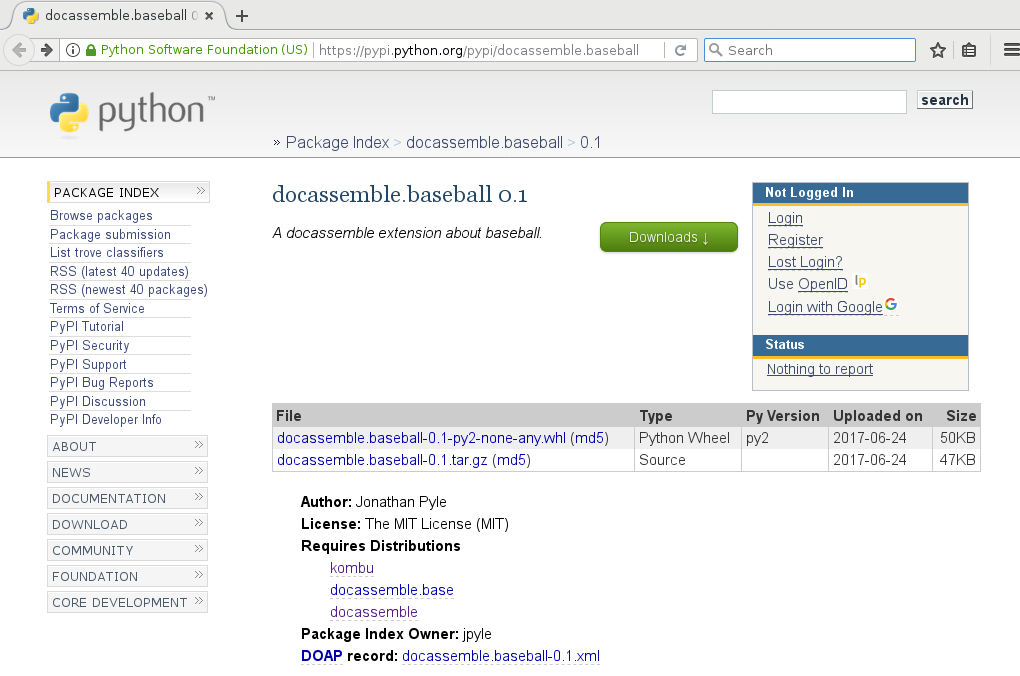 Now, on the docassemble menu (of this server or another server), you can go to Package Management and install the package by typing in “docassemble.baseball” into the “Package on PyPI” field.

You can publish your package on GitHub in addition to (or instead of) publishing it on PyPI. (Publishing on both sites is recommended. PyPI is the simplest and safest way to distribute Python packages, while GitHub is a version control system with many features for facilitating sharing and collaboration.)

To configure integration with GitHub, follow the steps in the setting up GitHub integration section, and edit the GitHub section of the configuration.

When that configuration is done, each user who is a developer will need to connect their GitHub accounts with their accounts on your docassemble server. From the menu, the user should go to “Profile,” click “GitHub integration,” and follow the instructions. If the user is not currently logged in to GitHub in the same browser, GitHub will ask for log in information. (Users without GitHub accounts can create one.) Users will need to give consent to giving the docassemble server to have privileges of making changes to repositories and SSH keys within the GitHub account.

To publish a package on GitHub, go to the Packages area of the Playground and press the

button. You will be asked for a “commit message.” This is a brief, one-line message that describes the changes made to your package since the last time you “committed” changes. Each “commit” is like a snapshot, and the history of “commit” messages is a record of the development of your project.

When you press the “Commit” button after writing the commit message, your package will be “pushed” to a GitHub repository in your account. If a repository does not already exist on GitHub with the name of your package, a new repository will be created.

You can follow the hyperlink to your package’s page on GitHub. 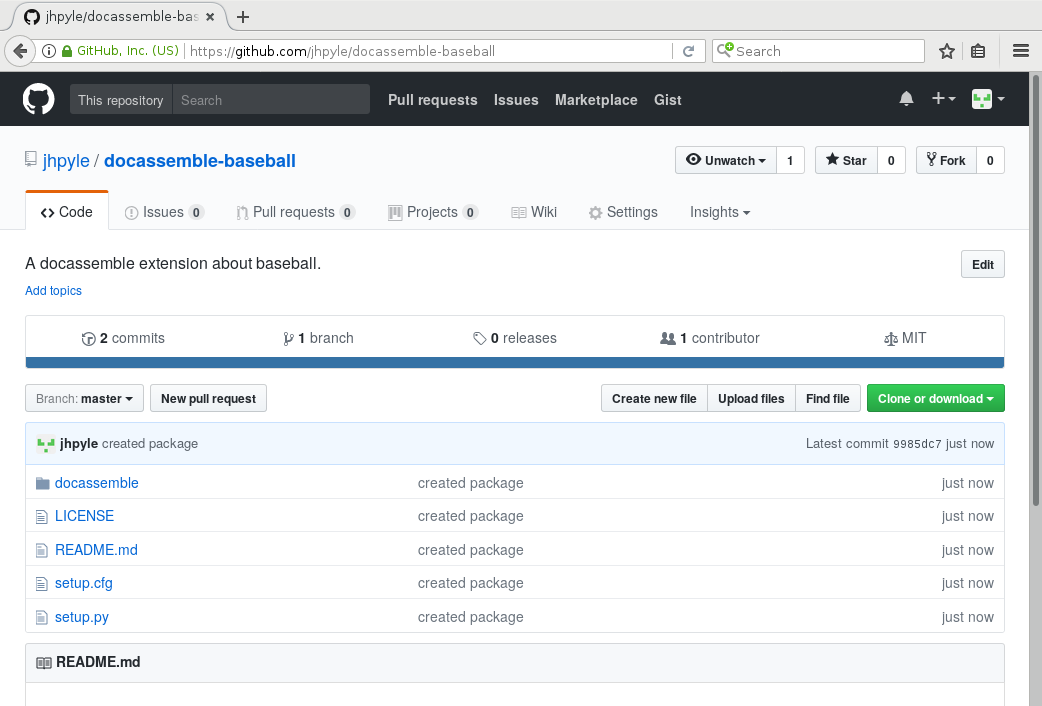 After your first commit, GitHub reports that there have been two commits; this is because the initial creation of the repository caused a commit (containing a LICENSE file only) and then the addition of the files of your package caused a second commit.

Once your package is on GitHub, then on the docassemble menu, you can go to Package Management and install the package using its GitHub URL.

Best practices for packaging your interviews

It is a good practice to bundle related interviews in a single package. Think about making it easy for other people to install your packages on their system and make use of your questions and code.

It is also a good practice to separate your interview into at least three files, separately containing:

This way, other people can take advantage of your work product in interviews that might have a very different purpose.

During the docassemble web app startup process, the packages in the docassemble namespace are scanned and modules are imported if they contain any class definitions or if the update_language_function() function is called. The early loading of class definitions helps to prevent problems when unpickling data from the SQL database. The update_language_function() has a global effect, and it is important that docassemble’s linguistic behavior is uniform over time and does not vary depending on which interviews the server has used. This also means that you have to be careful about which packages you install on your server – even a package you never use could have an effect on the way your server operates.

If you want to disable the auto-loading of a module, put this line near the top of the .py file (before any class definitions or references to update_language_function()):

If this line is present, then the server will not pre-load the module file.