In the docassemble web app, every screen that a user sees is generated by a question block, which is a section of YAML code that contains a question specifier. (Well, you can also generate a screen using the message() function, but that is an advanced topic.)

All blocks in an interview file must either be initial blocks, code blocks, or contain a question specifier.

By including the above YAML block in your interview file, you are telling docassemble that if it ever needs to know the value of swallow_velocity, it should ask the user the question “What is the airspeed velocity of an unladen swallow?” and provide the user with an input box labeled “Velocity” in which the user can type the answer.

Like many things in docassemble, the question specifier can contain Markdown and Mako. For example:

In this example, the word “airspeed” is italicized, using the Markdown syntax for italics. The type of swallow is given by a variable (african_or_european), the value of which ("African") is incorporated using Mako. (One of the features of Mako is that anything enclosed in ${ ... } is evaluated as Python code.)

The optional subquestion adds text underneath the question. It is typically used to explain the question in more detail, if such an explanation is necessary. 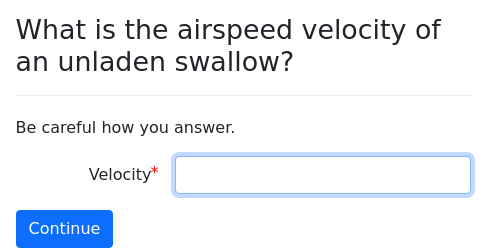 The optional under specifier adds text underneath the buttons. 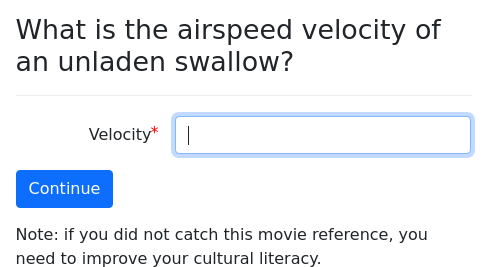 The optional pre specifier adds text before the question.

The optional post specifier adds text after the question. 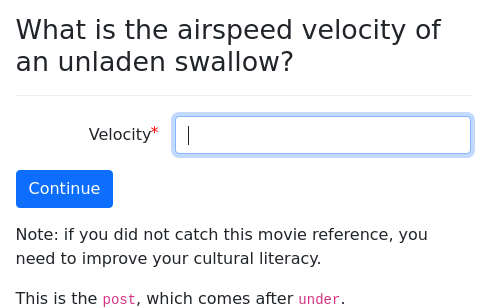 The optional right specifier adds text on the right-hand side of the screen, or below the question on small screens.

If your interview has questions that use the right specifier, you might want to set the centered feature to False so that the text on the right is wider.

The optional css class specifier can be used to set a CSS class for the <body> of the screen of a question.

The optional table css class specifier can be used to set the CSS class of any Markdown-generated tables that appear in the question. There is no feature in Markdown for specifying a class of a table. The class of tables can be customized at the question level, or at the interview level with default screen parts, or you can set a server-wide default with the table css class Configuration directive.

The optional question metadata specifier allows you to associate custom metadata with a question. You can use any format YAML will accept, and you can use Mako in text. The metadata will appear in the JSON representation of the question.

Here is a brief summary of the types of questions that can be asked. More detail about how these question types work is provided in the next section.

True or false: yesno and noyes

A yesno question will set a variable to True or False when a Yes or No button is pressed. noyes does the opposite.

You can ask a multiple-choice question by providing a list of choices: 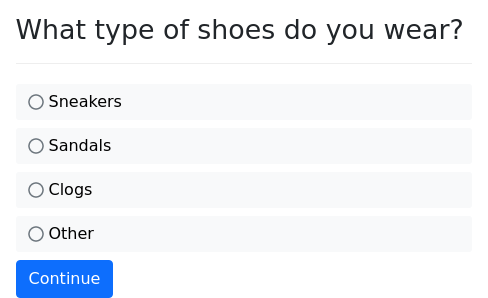 The variable indicated by field will be set to the value supplied in the choices/buttons list.

If you simply want the user to acknowledge something by clicking “Continue,” provide a continue button field.

The variable indicated by continue button field will be set to True when the user clicks “Continue.”

One or more fill-in fields: fields

You can ask the user to fill in multiple fields using fields. 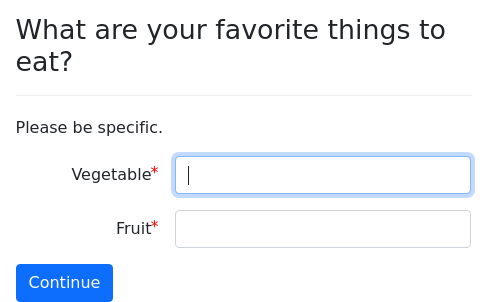 There are many other types of input that you can gather with fields, including large text areas, file uploads, radio buttons, and checkboxes. There are a variety of ways you can insert text into the list of fields to help guide the user. If you know HTML, you can insert arbitrary HTML, CSS, and JavaScript. Using the show if feature, you can cause fields to appear or disappear depending on the values of other fields.

You can ask the user to write his or her signature using signature: 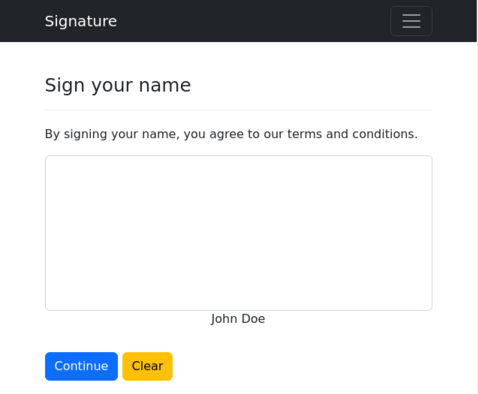 The signature will be stored as an image file in the variable indicated by signature.

Sometimes, the purpose of your question is not to gather information but to present an end screen to the user. You can create such “questions” by marking them as mandatory:

If you have more than one possible ending screen in your interview, use the event feature described below.

Using the buttons or choices syntax described above, you can add special buttons to a screen. These buttons are special because they do not set a variable.

These buttons are particularly useful on “terminal” screens.

There are six special button functions:

restart resets the user’s variable store, except that any parameters that were originally passed through as URL parameters will be used again. The user is redirected to the first question of the interview.

new_session does not disturb the current interview session, but starts a new session for the same interview. The original URL parameters are not used.

exit means that the user’s variable store will be erased and the user will be redirected either to the URL given by the associated url text, or if no url is defined, to the exit url defined in the metadata, or if that does not defined, then to the exitpage defined in the configuration. If the user tries to come back to the interview again, he will start the interview again, as though it had never been started. Original URL parameters will be lost.

Mako can be used in the url text.

logout logs the user out, if the user is logged in.

exit_logout does the same thing as exit, except that it also logs the user out, if the user is logged in.

leave works like exit except that the user’s variable store will be left intact. This means that if the user comes back to the interview again, he will pick up where he left off.

continue means that docassemble will move on from the question without really doing anything. Here is an example of when it is useful:

This example uses the actions feature and the menu_items special variable to present a special screen that shows a picture. This screen does not set any variable, but the user can click the button to “continue” with the normal course of the interview.

While using continue can be useful sometimes, it is generally not a good idea to structure interviews around questions that use continue. These questions cannot use the generic object modifier or index variables.

refresh re-runs the interview logic. It has much the same effect as refreshing the page in the browser. It is useful in multi-user interviews when the user is waiting for another user to finish entering information. It can also be useful in interviews that use external data sources.

signin redirects the user to the docassemble sign-in page.

Instead of using buttons, you can use choices to get a radio list instead of a selection of buttons.

The functionality is the same.

The command() function allows you to do similar things with Python code. In addition, the url_of() function provides URLs that accomplish a similar purposes.

Mixing special buttons with buttons that set a variable

If you wish to mix “special” buttons with buttons that set a variable, you can use the command() function in code to trigger the same effects as clicking on a “special” button.

The following example uses a mandatory code block to determine the course of the interview. Depending on the answer to an ordinary multiple choice question, it either exits from the interview or proceeds to another screen.

Another alternative is to use multiple-choice buttons that run code:

Some screens are shown to the user when a special event occurs.

Or, you might want to provide the user with the ability to review his or her answers on a single screen, using the review functionality.

The event specifier advertises to the interview logic that the question should be asked if a special event occurs.

This specifier can be used to indicate an ending screen, where your interview has more than one possible ending screen and you use interview logic to direct the user to the appropriate screen.

See interview logic for more information about how to give direction to your interview by adding code blocks that are marked with the mandatory modifier.

The event specifier is also used to create screens that the user can reach from the menu or from hyperlinks embedded in question text. For more information, see event, url_action(), process_action(), action_menu_item(), and menu_items.

Include additional buttons on the screen

If you want to include additional button choices on a screen, you can use action buttons. When the user clicks a button it will run an action in the interview.

For each button, the required items are action and label. You can optionally include color to indicate the Bootstrap color of the button (primary, secondary, success, danger, warning, info, light, link, or dark). The default color is primary. You can also optionally include icon to indicate a Font Awesome icon name to include in the button. If your action requires arguments, you can indicate the arguments using arguments. You can use Mako templating in any of these elements.

If you want to define the buttons programmatically, you can set action buttons to a dictionary where the only item is code.

When you use code to define the action buttons, you need to provide a Python expression that evaluates to a list of dictionaries, where each dictionary has the items action and label at a minimum.

By default, the buttons indicated by action buttons will be placed after the “Continue” button or any other buttons specified in the question, and before the question help button (if present). If you want a button to appear before the standard buttons of the question, set placement to before.

If you want the link to open in another window, use new window: True.

By default, if the user starts an action and then starts a second action without finishing the first, then when the user finishes the second action, the first action will be resumed. This is sometimes desirable and sometimes not. If you want the action launched by your button to be the only active action, set forget prior: True in the action button definition; then all prior actions will be forgotten.

When the user looks at a screen in an interview, there are many different “parts” of the screen. Above, you were introduced to the question, subquestion, under, right, and css class parts.

There are other parts of the screen as well, which by default are empty or have a useful default. The following interview demonstrates where each part is located. Try out the interview and look at the results with different screen sizes. 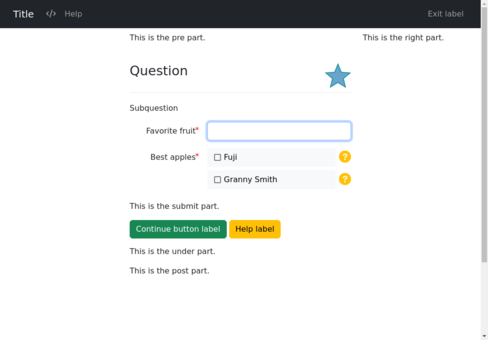 There are a variety of ways that you can specify what content should appear in these areas. These ways range from question-specific specifiers to interview-wide defaults to server-wide defaults. You should pick whatever method works best for your purposes.

There are three methods for specifying interview-wide default values for parts of the screen:

Finally, there is a server-wide method for specifying default values, which is to set the Configuration directives main page pre, main page post, etc. Mako templating is not supported and formatting must use raw HTML. These directives allow you to set different content for different languages.

For more information about each method, see its documentation.